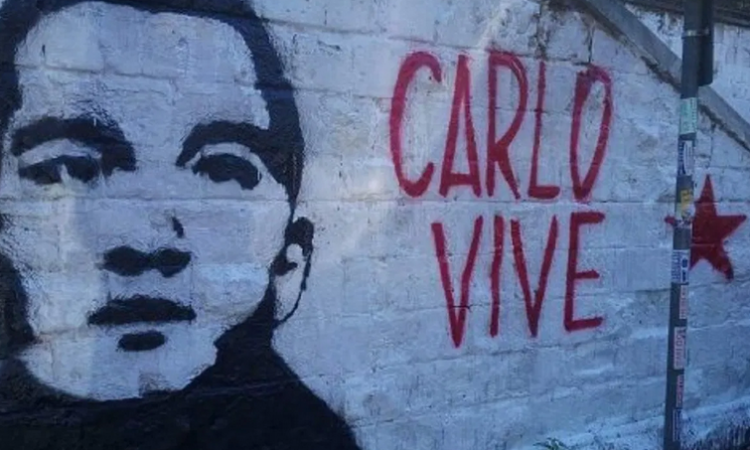 Nineteen years ago today, (July 20, 2001), 23 year old activist Carlo Giuliani was killed by Mario Placanica, a riot cop, during protests against the G8 summit in Genoa, Italy. One day later, on July 21st, 2001 cops raided the Diaz School in Genoa. In 2017 the European Court of Human Rights ruled unanimously that activists and journalists were tortured by cops during and after the raid. Today we remember Carlo Giuliani and all others who have fallen in the struggle against fascism, capitalism and oppression. Carlo Vive!

Published by Enough is Enough

In the afternoon of July 20, 2001, about 200,000 protesters took to the streets shouting and chanting their slogans against the neoliberal globalization when all of a sudden the riot police appeared and began to beat everyone they could get. In the morning hours windows were smashed, with riot cops observing the attacks from a pretty close distance. The attacks in the morning hours were broadcasted live on tv channels, owned by prime minister Berlusconi, to justify the police attacks against the demo in the afternoon which was peaceful until the police attacks started.

23-year-old activist Carlo Giuliani was killed by Mario Placanica, a cop, during the clashes that broke out after the police attacks in the afternoon. Images show Giuliani throwing a fire extinguisher at a police vehicle before he was shot and then run over twice by the Land Rover during clashes with police forces.

Hundreds of people were injured in Genoa. Hundreds were arrested. Most of those 329 arrested were charged with criminal conspiracy to commit destruction; but they were in most part released shortly thereafter because judges declared the charges invalid. Cops continued to raid social centers, media centers, union buildings and legal offices across Italy after the summit as part of ongoing investigations. More than 400 protesters and about 100 among security forces were injured during the clashes.

The following day, July 21, 2001,  was really the day after. Carlo’s death seemed to have brought a sort of mournful silence over the city. The noise of the violence had slowly faded away as the evening shadows and the stars appeared. On Saturday a quarter of a million people marched peacefully in an almost unreal atmosphere. The Black Block had vanished and the police just patrolled, as if the cops had already given vent to the adrenaline violence they had carried inside the previous day and now the hangover had taken over.

People were somehow relieved that the demo was peaceful and silent, but they didn’t know that cops were about to start another attack. The silence was just the peace before the final storm. At night cops raided the Diaz school, where people were sleeping and where the Independent Media Center (IMC) was based. On that Saturday night, as throughout the whole event in which the dark night of dictatorship stepped in once again, we saw “the most serious violation of democratic rights in a democratic country since WWII”, as Amnesty International later declared. Not only symbolically, deputy Prime Minister and Home Secretary Gianfranco Fini, leader of the fascist Alleanza Nazionale, was supervising the whole operation inside police headquarters in Genoa.

Many people got injured during the raid, others where arrested during the raid and got injured and tortured in the Bolzaneto prison. Prisoners at the temporary detention facility in Bolzaneto were forced to say “Viva il duce” (Fascist leader Mussolini was called il duce) and sing fascist songs: “Un, due, tre. Viva Pinochet!”

On arrival in Bolzano prison, people were marked with felt-tip crosses on each cheek, and many were forced to walk between two parallel lines of officers who kicked and beat them. Most were herded into large cells, holding up to 30 people. Here, they were forced to stand for long periods, facing the wall with their hands up high and their legs spread. Those who failed to hold the position were shouted at, slapped and beaten. A prisoner with an artificial leg, unable to hold the stress position, collapsed and was rewarded with two bursts of pepper spray in his face and, later, a particularly savage beating.

Prisoners who answered back were met with violence. One of them, Stefan Bauer, answered a question from a German-speaking guard and said he was from the European Union and he had the right to go where he wanted. He was hauled out, beaten, sprayed with pepper spray, stripped naked and put under a cold shower. His clothes were taken away and he was returned to the freezing cell wearing only a flimsy hospital gown.

The detainees were given few or no blankets, kept awake by guards, given little or no food and denied their statutory right to make phone calls and see a lawyer. They could hear crying and screaming from other cells. Police doctors at the facility also participated in the torture, using ritual humiliation, threats of rape and deprivation of water, food, sleep and medical care. A prisoner named Richard Moth was given stitches in his head and legs without anesthetics, which made the procedure painful.

Men and women with dreadlocks had their hair roughly cut off to the scalp. One detainee, Marco Bistacchia, was taken to an office, stripped naked, made to get down on all fours and told to bark like a dog and to shout “Viva la polizia Italiana!” He was sobbing too much to obey. An unnamed officer told the Italian newspaper La Repubblica that he had seen police officers urinating on prisoners and beating them for refusing to sing ‘Faccetta Nera’, a Mussolini-era fascist song.

Ester Percivati, a young Turkish woman, recalled guards calling her a whore as she was marched to the toilet, where a woman officer forced her head down into the bowl and a male jeered “Nice arse! Would you like a truncheon up it?” Several women reported threats of rape. Finally, the police forced their captives to sign statements, waiving all their legal rights. One man, David Larroquelle, testified that he refused to sign the statements. Police broke three of his ribs for his disobedience.

In a Europe where fascist parties are on the rise and where many of the “old and traditional” parties are forming an authoritarian society, backed by authoritarian and violent police forces, to cope with the capitalist crisis, Genoa could happen again any time and if we look how the cops operate in cities like Portland and Athens and many other places around the globe, its already happening…

This 1:05 hour-long film is a no holds-barred insight into the deadly riots that erupted at the Genova-hosted G8 meeting in July 2001. The film – made from over 160 hours of footage – was selected for the Venice Film Festival of 2002. Contains graphic violence.